Home • Are You Feeling Lucky?

Are You Feeling Lucky?

Are you feeling lucky? You’ve got to be if you measure your community’s overall financial health against an arbitrary percent funded value under 100%. Why you may ask? This method of targeting an arbitrary balance relative to the fully funded balance does not offer a complete picture of overall financial health. While maintaining a 100 percent funded balance is generally a safe strategy, it typically results in over-funded reserves. On the other hand, threshold funding provides a clear, easy-to-follow plan to ensure a healthy community and adequately funded reserves.

Percent funded reserve values compare the amount of money in your reserve account to the fully funded balance needed to remain in a ‘safe’ financial position. It’s a snapshot of what is currently in the reserve fund versus the overall depreciation of community assets. While some firms use the percent funded value to communicate the overall reserve fund strength, it remains an inconsistent approach due to a lack of consideration of time. Your association’s capital needs rest on a timeline, and this must be considered when measuring the overall health of reserve funds and the likelihood of a shortfall.

Consider the following example: you’re flying from New York to London, and the only information you have is that the plane is flying at 5,000 feet of elevation. If your plane has just departed or is near landing, 5,000 feet is an acceptable altitude. If you’re 5,000 feet mid-flight over the Atlantic, that’s another story. The altitude means nothing when lacking the context of the flight path. Similarly, your association’s timeline of major projects must be taken into consideration to be able to compare your current reserve funds to the likelihood of going broke. Simply put, your financial plan means nothing without considering your association’s flight path. 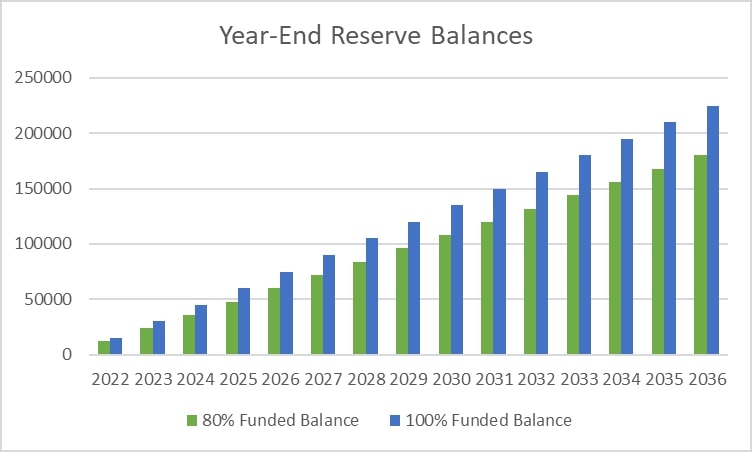 Another point to consider is that while you may see a large percent funded value in reserves, this does not guarantee there are adequate funds available to avoid a shortfall; and while a 100 percent funded reserve is safe, it does not always eliminate the possibility of a shortfall.

Take, for example, an association that has a roof with an expected useful life of 15 years, and a future replacement cost of $225,000. If that association sets aside $15,000 each year, they would be considered 100 percent fully funded, eliminating the need for future monetary assessments. But if the board agrees each year that 80 percent funded is well-funded, there will be a $45,000 shortfall at the time the roof needs to be replaced.

Fortunately, most associations have multiple assets which require repair and replacement in different years. Thus, the goal of maintaining a 100 percent funded reserve balance at all times is generally not necessary and often leads to over-funded reserves. After conducting tens of thousands of reserve studies around the country, we can definitively say that there is no direct relationship between an association’s percent funded value and the likelihood of a shortfall.

In reality, the likelihood of running out of money is relative to the current reserve funds and near-term need to spend that money. An association that just replaced a major common element like roofing or siding may have a percent funded value well below 30 percent, even if they are not likely to experience a shortfall. This is especially true when there are no major projects coming up near-term.

So, what is a reliable way to ensure you minimize the risk of a future shortfall? Threshold funding. Threshold funding focuses on maintaining a minimal yet sufficient reserve balance, eliminating arbitrary benchmarks, and increasing monetary transparency. It is also the most cost-efficient approach to maintaining reserve funds. 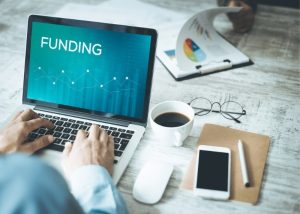 Threshold funding calculates future reserve contributions that are stable and consistent from year to year. Your reserve study consultant creates a funding plan that supports all monetary needs while maintaining a minimum reserve balance; meaning you’ll realize the most efficient use of reserve funds while having an equitable plan for current and future owners.

Measuring reserve funds is not a one-size-fits-all approach. Each association has different assets, replacement schedules, and other funding needs. Your community’s best bet is to focus on maintaining a minimum reserve balance using threshold funding. If you follow this guidance, your association will maintain adequate reserve funds while minimizing the risk of future monetary shortfalls.

So, are you feeling lucky? Just like the airplane traveling at 5,000 feet, a percent funded value means nothing when it lacks flight path information. Maintaining a threshold funding goal provides your association with a clear understanding of its financial health and minimizes the risk of a future shortfall.