There’s no getting around it – inflation isn’t going anywhere quickly. Last year, the inflation rate hit 7 percent, and by February 2022 it had increased to 7.9 percent. While inflation affects us all, it affects community associations and those who live there in unique ways. From something as little as a homeowner’s grocery bill to something as intensive as the cost of a roof replacement, the effects of inflation can be felt far and wide in association living. 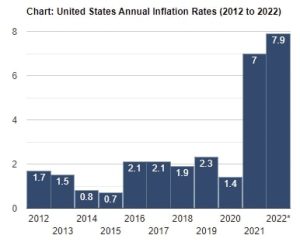 Perhaps the most obvious and prevalent challenge facing associations today is the impact of inflation and supply chain disruption on the timing of capital projects. Widespread labor shortages, particularly the lack of truck drivers, are causing a backlog of projects from roofing to paving and everything in between. With fewer people to haul materials, delays are not only common but expected. Additionally, COVID-19 lockdowns forced people worldwide to find new jobs or leave the workforce altogether, the effects of which continue to be felt across many industries.

Labor shortages not only increase the delivery time of project materials, but in some cases can extend a project’s timeline due to a limited number of people available to physically complete the work.

While the timing of capital projects will continue to be extended, associations can avoid major project disruption by planning accordingly on a longer timeline. If a project is due in 2023, now is the time to start it. Expecting to complete a project within a similar timeline that worked the last time around will not suffice in this current climate, and it’s better to get a head start to avoid issues later down the line.

Similar to project timeline disruptions, the current climate has also lent itself to capital planning issues within community associations. Because of this financial turbulence, an association’s existing reserve fund or reserve funding plan may be prematurely outdated and in need of updates. This is especially true in cases where there are projects due soon or projects already in progress that are capital-intensive. In these cases, budget and repair/replacement plans will need to be updated as soon as possible.

The update of capital plans often means the updating of an association’s current reserve study. While reserve study reports do take inflation into account in their initial reserve budget plan, it’s impossible to predict an inflation hike such as the one currently being experienced. However, reputable reserve study firms are constantly in tune with material prices and remain on the front end of adjusting their recommendations to take market changes into account. Where standardized inflation information is lacking, reputable firms stand strong.

Commissioning a reserve study update, which does not have to include a site visit if you’ve had a study done in the last 2 years, can help associations get back on track with near-term capital expenditures and funding needs while taking into account the impact of current inflation rates.

Like prices everywhere, it’s probable that in order to keep reserves on the right path, dues and assessments within associations will need to be raised to keep up with inflation. Of course, this is not a favorable option in any situation, but naturally, is becoming increasingly necessary. However, raising dues and assessments must be kept reasonable and fair.

In order to do so, many Boards tie these increased costs to the national Consumer Price Index (CPI) to their governing documents, which offers validity and backup for decision-makers to rely on when communicating increases to homeowners. The CPI was developed to determine the relative cost of goods and services throughout the country, and acts as a sort of barometer in relation to inflation and its trends.

In recent years, inflation has not had dramatic influence over the operation of community associations. For the past five years, the CPI has remained relatively consistent below 2 percent. In 2021, the CPI rose to 5.4 percent, and in 2022 it is expected to rise once again. By looking at the CPI, associations can determine the new average cost of living and adjust their annual assessments accordingly, ensuring they can continue proper community upkeep.

For both homeowners and associations alike, inflation has led to and will continue to contribute to increased insurance premiums. In fact, insurance premiums began to rise before the raging inflations rates we are seeing now. Because premiums take into account how much it would cost to rebuild a home in the case of a loss, inflated supply costs have raised premiums exponentially. Additionally, deferred maintenance of structural components could also have a direct impact on your community’s insurability and subsequent premiums.

In the grand scheme of things, though the timeline can not be predicted, prices and delivery times will eventually return to normal. But for now, the troubles associations are experiencing are valid and challenging to address. If your association is struggling, and a reserve study or reserve study update could help get you back on track to financial and physical health, let’s get in touch!